Fortaleza is one of Brazil's major cities with a colorful harbor area and a colonial history dating back to 1612. It has developed around the ancient fortress of Our Lady of Assumption. There's much to enjoy in its old center, where visitors can bargain in the market for embroidery, lace and other local handicrafts. In recent times, the city has made attempts to expand the tourist trade and to encourage the construction of luxury hotels along the city's fine beaches.

Belem is located 60 miles from the Para River entrance to the Amazon Delta. Amid the broad avenues and busy markets of this, Brazil's chief port of the lower Amazon River, there remain many intriguing reminders of how thousands of tons of rubber were once loaded for transit here to the markets of the 19th Century. One of the most attractive cities in South America, Belém has numerous public squares and well-paved streets, many of which extend to the edge of the jungle. The cultural centre of northern Brazil, Belém is the site of the Federal University of Pará (1957) and the Goeldi Museum, with its world-famous Amazonian ethnological and zoological collections.

A few hours upriver from Belém, the region of the Thousand Islands is entered. The passage through this maze of islets is known as The Narrows. A journey through The Narrows provides the unique opportunity to obtain a close-up view of the rich equatorial vegetation and a glimpse of the people who inhabit this area.

A quiet town on the Rio Mamore, Guajara hosts an annual festival in mid-August known as the Boi-Buma festival, which is a recreation of a larger celebration in larger areas of Brazil.

Curua Una is one of the many tributaries of the awe-inspiring Amazon. The Curua Una winds into a dense rain forest, giving explorers the sense of traveling back in time to a primeval era. Take a local boat on an excursion and explore the river close-up. Keep a look out for exotic animals, plants and birds….even try your hand at piranha fishing – if you dare!

Ile Royal is off the coast of French Guiana, is one of the three ‘prison islands’ along with Devil’s Island and Ile St. Joseph. Ile Royal housed those criminals deemed less dangerous, as it was the site for the guard barracks, the chapel, the prison hospital and the lighthouse.
While remnants of the prison can still be seen on the island, it is much more hospitable now, with luxurious resort and hotels

Paramaribo, the 17th-century capital of Suriname, is graced with attractive Dutch, French, Spanish and British colonial architecture. Imposing brick buildings overlook grassy squares and wooden houses crowd narrow streets. Towering palms shade some areas and mangroves still hug the riverside. Mosques and synagogues sit side by side, while Javanese vendors peddle satay and Dutch-speaking Creoles guzzle beer at sidewalk cafés. Central Paramaribo's focus is the Onafhankelijksplein (Unity Square), fronting the Presidential Palace. Immediately behind the palace is the Palmentuin, an attractive park with tall palms inhabited by tropical birds. To the east is Fort Zeelandia, a 17-century riverside fortification used for the detention and torture of political prisoners after the coup of 1980. The main market is found on the riverside boulevard, Waterkrant, and ferries for Meerzog, on the other side of the river, leave from nearby.

Georgetown is the beautiful capital city of Guyana. This former Dutch and British colony offers verdant tree-lined streets, Victorian architecture, and landscaped canals criss-crossing through the city. In Georgetown travellers may be interested in visiting the Walter Roth Museum of Anthropology, which houses artifacts pertaining to Amerindian culture. There is also the beautiful Botanical Gardens, with Victorian bridges, pavilions, and tropical flowers. Outside Georgetown river boat trips are available to Kaieteur Falls, which is five times the height of Niagara falls.

Georgetown is the beautiful capital city of Guyana. This former Dutch and British colony offers verdant tree-lined streets, Victorian architecture, and landscaped canals criss-crossing through the city. In Georgetown travellers may be interested in visiting the Walter Roth Museum of Anthropology, which houses artifacts pertaining to Amerindian culture. There is also the beautiful Botanical Gardens, with Victorian bridges, pavilions, and tropical flowers. Outside Georgetown river boat trips are available to Kaieteur Falls, which is five times the height of Niagara falls.

Port of Spain is a seaport in northwest Trinidad and the capital, commercial center and leading port of Trinidad and Tobago. Exotic Port of Spain has architecture from around the world from Hindu temples to gingerbread rococo. It is site of Royal Botanical Gardens; National Archives; National Museum and Art Gallery; an Anglican cathedral; and a Roman Catholic cathedral consecrated in 1832. Trinidad, home of carnival and steel-band, is an astonishing melting pot of African, Oriental, Indian, European and New World people and cultures. Birds are a major attraction here. A Native American village known as Conquerabia occupied the site when the Spanish settled in the area in 1595 and renamed the community Puerto de España. After the British took control of the island in 1797, the settlement's name was Anglicized to Port of Spain. The city served as capital of the Federation of the West Indies from 1958 to 1962, before the grouping was dissolved. 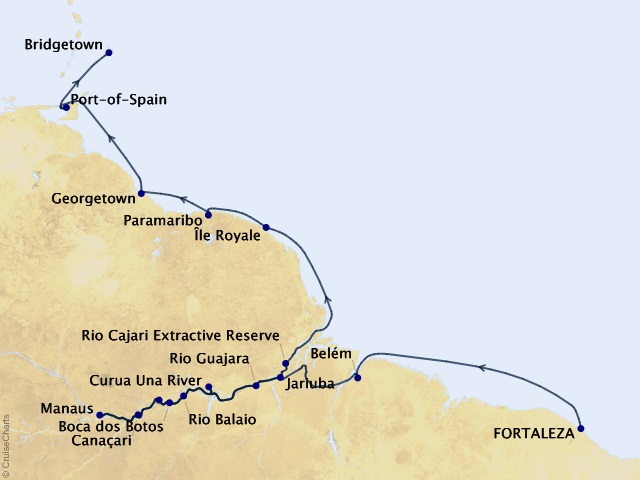 Departure Date:
4/4/2022
Number of Nights
21
Cruise Inclusions:
Remarks:
Cruise Only Fares are in US dollars, per person, based on double occupancy.

All prices per person and in USD unless otherwise stated.
Offer ID:
1404864