Santiago, with over four million people, is the fifth-largest city in South America. Standing in a wide plain 1,800 feet above sea level, Santiago boasts a beautiful setting. Snow-capped peaks of the Andes chain provide a dramatic backdrop. Tastefully laid-out public gardens contribute to the beauty of the city. However, Santiago also suffers from horrendous traffic and a high percentage of pollution. The heart of Santiago is the Plaza de Armas, flanked by the cathedral, the archbishop’s palace, the National History Museum and fine arcaded buildings lined with shops. The two-mile-long Avenida O’Higgins is the major thoroughfare, commonly known as the Alameda. There is a splendid view over the city from San Cristobal Hill, crowned by the statue of the Virgin Mary.

Valparaiso: Encounter with the Art - 4 hours

Valparaiso - Wines of the Casablanca Valley

Niebla is a coastal town located at the mouth of the Valdivia River in Chile. In the summer months, visitors will enjoy visiting Niebla's beautiful beach and folk market. History lovers may also be interested in viewing  the ruins of a Spanish colonial fort and its accompanying museum to learn more about Chile's interesting colonial past.

Evocative of Switzerland, Chile's lake district is noted for its pristine, almost Alpine scenery and bracing climate. Visit Lake Llanquihue (pronounced "Yankee-way"), and explore the rugged coastline leading to Ensenada. Marvel at a Fuji-like volcano, Mount Osorno, which rises to a height of 8,500 feet. View the rushing falls and turbulent rapids of Petrohue and cruise the blue-green waters of placid Lake Todos Los Santos. Taste Chilean country specialties and enjoy folklore entertainment at a rustic hosteria.

Puerto Montt: The Route of the Pioneers - 7 hours

Castro, with some 20,000 inhabitants, is the capital of Isla Grande de Chiloé and an island of dense forests and undulating hills. Between the Isla Grande and the mainland, the Golfo de Ancud and the Golfo de Corcovado are dotted with many smaller islands of archipelagic Chiloe. The distinctive character of the island has been influenced by 200 years of isolation from the mainstream of Spanish colonial development as well as its dependence on the sea. Castro is especially noted for its variety of styles in housing including the palafitos, which are dwellings built on stilts above the water. It also has a splendid cathedral, several museums and a renowned handicraft market, all of which make Castro an attractive place to visit. Its isolation has encouraged self-reliance and also a friendliness toward visitors that has changed little since Darwin remarked more than a century and a half ago, "I never saw anything
more obliging and humble than the manners of these people."

The English Narrows is an 11 mile long passage located in Chile's southwestern Coast in the Messier Channel. Vessels pass through with the proper wind and tide, as the passage is only 200 yards (180 m) wide.

The Chilean Fjords offer some of the most awe-inspiring sights of your journey. Simply look to the sky to see graceful Andean condors floating on the wind. Bring a camera to capture sights of incredible jagged walls of glacier ice rising up from the sea. And for pure enjoyment, watch the antics of the flightless, tuxedoed Magellanic penguins.

Punta Arenas is the southernmost city on Earth, overlooking the Straits of Magellan. Situated astride one of the world's historic trade routes, its prosperity has risen and fallen with that trade. Punta Arenas enjoyed its first great boom during the California Gold Rush, when it served as a haven for great clipper ships. Although the port's importance diminished after the opening of the Panama Canal, the city reached even greater prosperity early in this century as the center of Chile's international wool trade. Today, Punta Arenas reflects a great mix of cultures, from English sheep ranchers to Portuguese sailors, and it remains an utterly fascinating testament to the Chile's rich history. Punta Arenas is also the starting point for excursions to some of the most spectacular scenery in the world.

Punta Arenas: Exploring the End of the World - 3.5 hours

Punta Arenas - A day on a Patagonian Ranch - 5 hours 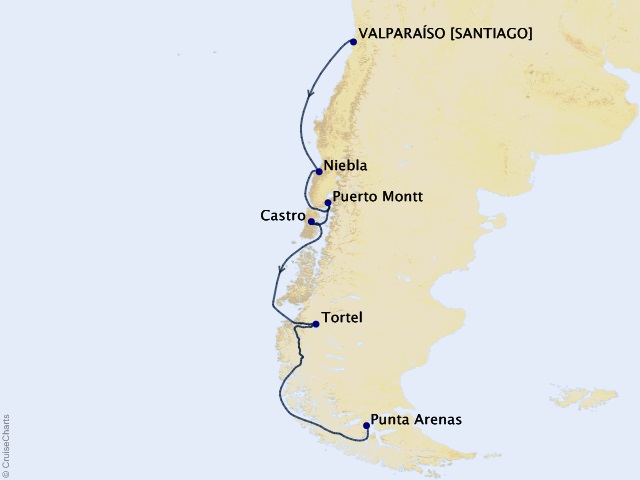 Departure Date:
11/5/2021
Number of Nights
9
Cruise Inclusions:
Available Addons:
Remarks:
Cruise Only Fares are in US dollars, per person, based on double occupancy.

All prices per person and in USD unless otherwise stated.
Offer ID:
1382985