Also known as Grand Canary, Las Palmas in the largest of Spain’s Canary Islands. During Christopher Columbus’ 1492 voyage of discovery, he was forced to pull his ships into Grand Canary to make repairs to the “Pinta”. During three subsequent voyages, he stopped again in the Canary Islands on his voyage of discovery. During the late fifteenth century, the city of Las Palmas was established by the Spanish in the heart of a lush palm grove. It is today the largest city in the archipelago as well as one of Spain’s leading ports.

The island of St. Martin is divided between French St. Martin in the north and Dutch St. Maarten in the south. Although the cultural flow transcends any borders, each side manages to retain its own distinct flavor. This 37-square-mile island promises beautiful vistas, first-rate water sports and stunning beaches. Philipsburg is the capital of Dutch St. Maarten. Its two main streets, Frontstreet and Backstreet, are bustling thoroughfares lined with shops and restaurants. 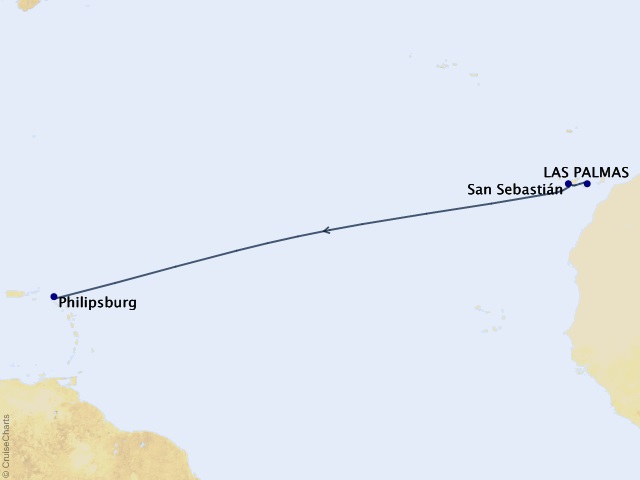 Rates are cruise only, per person, based on double occupancy. Government fees/taxes additional for all guests. Rates are subject to availability and may change without notice. Restrictions may apply. Fuel surcharges may apply. Please ask your travel counselor for details.

All prices per person and in USD unless otherwise stated.
Offer ID:
1352780