Astoria is a city of 10,000 people on the Columbia River, just a few miles from the Pacific Ocean. It is surrounded by the beauty of the forest, mountains, 3 rivers and the sea. Astoria is part of a nationally significant historic region at the western end of the Lewis & Clark Trail. Astoria is the oldest American settlement west of the Rockies; a place that takes visitors back to simpler times, its architecture dominated by hundreds of Victorian homes clinging to steep wooded hillsides and with a revitalized 1920s era downtown; all set against a backdrop of tremendous natural beauty. Unspoiled and generally uncrowded, Astoria is near several first-class interpretive attractions including Fort Clatsop, the Columbia River Maritime Museum, the Flavel House, Fort Stevens State Park, the Astoria Riverfront Trolley and the Astoria Column. Because of its steep hills and beautiful Victorian homes, Astoria has been called the "Little San Francisco of the Pacific Northwest."

Mount St. Helens is the site of Washington's famous volcano that erupted in 1980. The most popular attraction is the helicopter tour, which flies straight up to the crater. Other activities in the area include hiking, biking, skiing, and fishing. Silver Lake has some of  the best fishing in the area and boasts a spectacular view of St. Helens. There are also several visitor centers including the Johnston Ridge Observatory, and Forest Learning Center where families can learn more about the volcanoes. 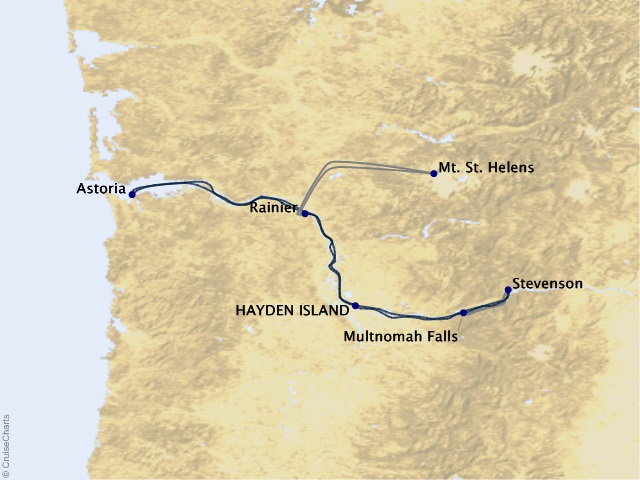 Departure Date:
10/20/2021
Number of Nights
4
Cruise Inclusions:
Remarks:
Prices are per person based on double occupancy. Pricing on some sailings may reflect special limited time offers, not combinable with any other offers/discounts. Valid on new bookings only.

All prices per person and in USD unless otherwise stated.
Offer ID:
1358493