Tortola became notorious as the haunt of buccaneers; nearby Norman Island is said to have provided the inspiration for Robert Louis Stevenson’s Treasure Island. Approximately 80 percent of the population live on Tortola, the largest island in the archipelago. The capital, Road Town, is the administrative and business center of the B.V.I. Its Main Street features typical island-style buildings. Banks, government offices and a small craft village are built on filled land, named Wickhams Cay. While scenic and rugged Tortola offers a number of attractions, the main focus are the beautiful waters surrounding the island. They attract a large number of sailing vessels throughout the year. The annual Spring Regatta is held in Sir Francis Drake Channel, considered one of the best sailing venues in the world. Visitors keen on watersports and swimming will find beautiful white sand beaches and clean, warm waters.

The island of St. Martin is divided between French St. Martin in the north and Dutch St. Maarten in the south. Although the cultural flow transcends any borders, each side manages to retain its own distinct flavor. This 37-square-mile island promises beautiful vistas, first-rate water sports and stunning beaches. Philipsburg is the capital of Dutch St. Maarten. Its two main streets, Frontstreet and Backstreet, are bustling thoroughfares lined with shops and restaurants.

Set in a large bay on the leeward side of the island looking out onto the Caribbean sea, Fort de France became the capital of Martinique when St Pierre was wiped out by the eruption of the volcano Montagne Pelée in 1902.

The town has mushroomed from less than 10,000 inhabitants at the time of the eruption to its current level of nearly 100,000 people. The historical centre grew around the strategic point of the Fort Saint Louis, which was first established in 1638. There are numerous cultural and historical places of interest in Fort-de-France, as well as a wide choice of quality shops, restaurants, cafes and bars, selling French and Creole products. English is widely spoken and understood, and US Dollars are accepted in most outlets.

A lively blend of French and English cultures, St. George's has steep hills to climb, spectacular views to photograph and a rum distillery to tour. St George's has one of the prettiest harbour settings in the Caribbean. Tourist infrastructure is still generally small-scale and locally owned and offers a good balance between comfort and price, making Grenada a great getaway for those who want to avoid the resort experience. 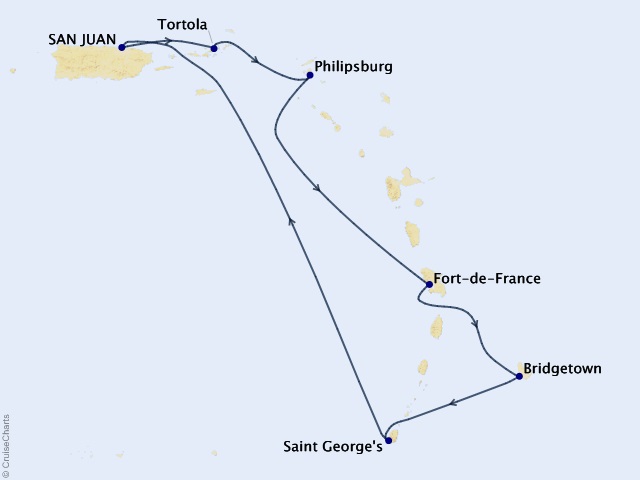 Rates are cruise only, per person, based on double occupancy. Taxes, Fees and Port Expenses of $86.42 additional for all guests. Rates are subject to availability and may change without notice. Restrictions may apply.

Departure Date:
4/10/2021
Number of Nights
7
Cruise Inclusions:
Available Addons:
Optional roundtrip airfare from your city
Optional shore excursions
Remarks:
Prices are per person, based on double occupancy. Airfare, Taxes, Fees and Port Expenses are additional for all guests. Pricing for 3rd and 4th guests are available upon request and are subject to stateroom category availability. Prices change frequently

All prices per person and in USD unless otherwise stated.
Offer ID:
1329527